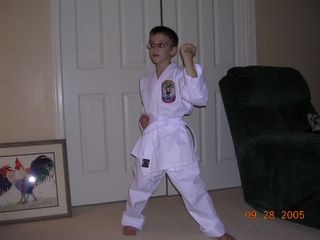 Grasshopper began his karate lessons this week. Doesn't he look tough? He was trying to sneer and look mean when we took his picture. He's had 2 lessons so far and is enjoying it. He's paying close attention and following instructions well. One of his friends from school is also in the class so there's the added social bonus.

I so want to take lessons with him. I've always wanted to study martial arts, but money was in the way. Even now, I can't afford lessons for both of us. However, I'm doing cub scouts with him this year so it will even out. If I could get out of a standing 4 pm Mon/Wed/Fri meeting, I could actually take him to his lessons. For now, the Wife is bringing him. But that should change soon.

I'm a little fearful for Maverick. If Grasshopper keeps up with his studies and becomes a Karate Master, he's going to kick his brother's butt. I may have eventually get him involved so he can defend himself.
Email Post