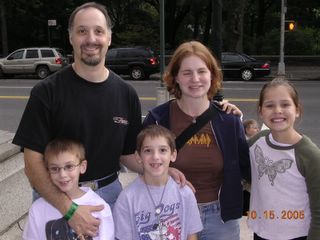 Ok, Julie, sorry for the picture, but it's the only one we took. Didn't realize your eyes were closed when the shot was taken. Please don't hunt me down and kill me in my sleep!

So, here's the tale of my very first blog meet! The plan for the day was as such: Franco family goes to the USS Intrepid museum in the morning. After lunch, meet up with Julie, Julie's mom, Rick, and Rick's youngest at the Muesuem of Natural History. We made it to the Intrepid museum when it opened as planned. From there it all went to hell.

We made the mistake of walking from the Port Authority Terminal to the Intrepid. The map said about 8 blocks. How far could that be? Pretty fucking far. Didn't seem like a big deal walking out there. But then we spent the next 2 hours walking around an aircraft carrier. Then had to walk another 8 blocks to a subway station. THEN, we ended up on the wrong side of the street when we got on the subway, and ended up riding around for an hour before we finally made it to the Museum of Natural History an hour late. I will not go into too much detail about the subway as I will be devoting a post to how NYC transportation hates me.

So we managed to finally meet up with Julie an hour later than we had planned. Julie, I must say, took everything in stride and was ultra cool. We were totally exhausted, at least, the Wife and I were. The boys were still FULL of engery. The little snots. We went into the museum and the Wife was so tired she ended up sitting in the African Mammal exhibit with Julie's Mom while Julie, Rick, his youngest, the boys and I looked around. We spent most of our time in the dinosaur and earth exhibits. Again, Julie was very understanding of the fact that I must have looked like death warmed over.

Julie was fun to hang out with. The Wife felt bad that she didn't get a chance to look around with us. I think my favorite moment at the museum was when Julie managed a small anti-Bush rant in with Rick's youngest while looking at the earth exhibit. It was impressive how she managed to work it in. And so politely explain why Bush is such an asshole without actually using the word in front of a kid.

We all left the Museum at about 4:30 after the obligatory blog picutres. I think Julie's came out better than mine, since she had Rick retake hers. I met up with Julie again outside the Queen concert the following night. We hung out a little before the show and got our T-Shirts, etc. Actually, I got the T-Shirt and 6 pence, she got the hoodie. Must be nice having a mom that slips you some extra bucks to get the cool stuff. After the show, Julie's mom was kind enough to give me a ride back to the hotel. We got only slightly lost, but managed to find the hotel with only one or two turn arounds. I learned that one of the advantages of having a very tall significant other is that they can reach across a windshield and clean it with one swipe of a squeegee at a gas station. And that Julie's mom will find a cheaper gas station less than 5 minutes of filling the tank.

All and all, meeting Julie was a definate high point of the weekend. I shall regale you with more stories this week, including afore mentioned transportation story, plus the other sundry adventures of the Franco family in the Big Apple. Finally, I DO HAVE PICTURES! Here's the link to our site. Just click on the picture to start the slide show. Most of the pictures are from the Intrepid, as I was too tired to bother going back to where the Wife sat to get the digital camera. Dammit, we're so fucking old, its sad.
Email Post