To start, I had a great anniversary (and I believe the Wife did as well). After we got the kids off to school, we went shopping, had a very nice lunch, looked at a new bicycle for the Wife, and then it was time to go home to meet the kids. I got her a very nice anniversary ring and a GPS. She's been mentioning how she could use a GPS for a while to everyone so I did get the hint. She got me a very nice card and a mind blowing roll in the sack. I think I got the better deal.

This weekend the Wife is off to camp with the girls. She and some of her lady friends are spending the weekend at a YMCA camp with no guys. There's all kinds of cool activities for her do to and best of all she leaves her 3 boys and her dog at home. We have a weekend of video games, playing a gig, and Edward Scissorhands planned. I'm pretty sure when she gets home she's going to find the house a total mess and the three of us in our underwear scratching our butts and watching sports. I highly encouraged her to go and have fun since she needs a weekend away. I considered it an extra anniversary gift.

Ain't I a great husband?

Wife Update: The Wife had a GREAT time camping! She hiked, had excellent food, got plenty of girl time, and even went kayaking! I should kick her out of the house more often.

Quick update. The boys grabbed a ton of great pictures from the gig. I must say the Rocker Guy (and the band) was ON! Anyway, it was a great gig and here's a couple of pictures for your enjoyment. 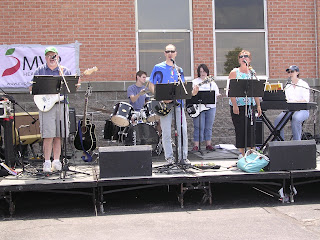 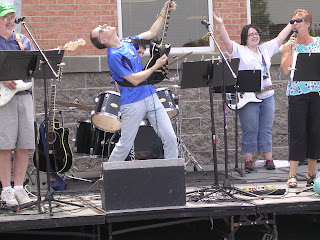