The Wife - The Wedding and Honeymoon

Before I get into the next part of the saga, thank to everyone for their input on the guitar. I went to Guitar Center tonight and played a bunch of guitars, including the V. I was underwhelmed. I played the V for about a minute before deciding I hated the tone. I found a Schecter that was not bad, but I think I'll wait. I have 3 guitars that the first time I played each of them, I HAD to own them. They were perfect. I've been settling all these years for a backup guitar. I will settle no longer. I will look until I find another perfect guitar, and then sell the "Pink Lad".

Now, on with the story. When last we left off, The Fiance and I were planning our wedding. Once she had the ring, we waited until spring and booked the reception hall. This was over 18 months in advance. Sound too early? We didn't get our preferred date of June 10, 1989. That Saturday and every other Saturday in June were booked already, except for June 3, 1989. So, since we really wanted that party house, we booked the 3rd. And you thought booking a hall that far in advance was nuts. Hah! Silly people.

We then took a break and went on with our lives for about 8 months. After all, with the hall booked, the only other thing to worry about at an early stage was the band. Because we were having a live band. I was willing to compromise or cave on many things. But we WERE NOT having a DJ. It goes against the Rocker Guy Code of Ethics. Luckily, The Fiance agreed with me. We went to hear a band recommended by our caterer and they were fabulous. They had a bunch of old people dancing at a St. Patty's day dance so we figured they'd be good for our crowd as well. AND they were free on our wedding date. In an amusing side note, they asked how we were referred to them. We told them the caterer recommended them and they replied, "Oh, so The Nazi's doing you wedding." Apparently our caterer had a reputation for making sure everything went just so and exactly on time. We didn't have a problem with that.

So, fast forward to early winter and we picked out invitations. I let The Fiance do most of the picking and provide final selectons for approval. We both agreed on a cute invitation with bears kissing when you closed it. I know, how very cute. But hey, we were young and in love (as opposed to now being old and in love). We also picked out a cool Precious Moments figurine of a bride and groom to top the cake. It ended up being too heavy to top the cake so we displayed it NEXT to the cake. We had a few other details to deal with, like who to invite, responses, who sits where, etc. But all in all it wasn't that stressful. Shortly after getting Officially Engaged, the Fiance found a wonderful off the rack dress at a wedding show that cost all of $138. Yes, you read that correctly. And she looked FABULOUS in it.

So, all preparations are made. It's coming up on the wedding. So what's our schedule look like just before the wedding? Well, many of you know I'm ex-Navy. I joined the Navy because they were kind enough to pay for college. So I owed them some time. Now, remember, we're getting married on June 3, right? So TWO Saturdays before that, we both graduated from college. We're now free and clear for a week before the next event. So we chill for a week. The NEXT Saturday, I was commisioned as an officer in the United States Navy. So then I have to "work" for a week, meaning I show up at the ROTC unit every day and hang out till noon then go home. Then the NEXT Saturday I get married. Pretty exciting couple of weekends, don't you think?

The wedding went off without a hitch. Well, almost without a hitch. My buddy Scott was one of my groomsman and his jacket was too big. We had to wait until after the wedding ceremony to get him one that fit better. That was about it. And he was so upset that he'd ruined our wedding. Too damn funny. The ceremony (a Mass) seemed to go really quick. We chit chatted through the entire thing. Then off to the photographer's place for pictures. The Wife's mom paid for the best guy in town to do our pictures under the theory that you only get married once and you get one shot to get the pictures right. And right she was. They came out BEAUTIFUL. During pictures my brother and the Matron of Honor ran off to get milkshakes. AND DIDN'T BRING US ONE! That's my bro for ya. After that it was off to the reception.

The reception was a blast. The food was great. The band rocked. I danced the whole night to every song. And I don't dance. We were so busy dancing and talking to friends, we got just a bit of our wedding cake (no I didn't smoosh it in her face). And we had this HUGE cookie tray of which we got NONE! Too busy having fun to eat. All in all it was the best reception I'd ever been to (before or since), which is as it should be. We wanted to cut out before the band finished but we were having so much fun we were practically the last to leave! I think about a dozen people were left and we only left cause the band was done playing. Ah, that's what a wedding should be. Many fond memories, like my buddy Scott doing the chicken dance even though he had a hernia. The looke on the Wife's nephew's face as he was vailiantly trying to stay awake (he was like 7 or something). The rearranging of table seating so the "Italians" could sit together and talk Italian with my grandmother. All kinds of stuff like that.

For our honeymoon, we decided to bed and breakfast in Massechusetts. Our first stop was Sturbridge, where we planned to stay about 3 days and explore Old Sturbridge Village. I recall the place we stayed was very nice. Breakfast was AWESOME. I had the hugest Belgian waffles I'd ever seen. We had a nice room with a 4 post bed. And the Village was very cool. But we had two problems. The first problem was that rain was forcast for the whole week. So our original plan of doing a lot of wandering by foot was out. We did the Village and visited a couple of shops, but that was it. And we hadn't anticipated what to do with no TV in the room. After all, it was a Bed and Breakfast and supposed to be rustic. I'm sure you saying to yourself that a newly married couple can find lots of ways to amuse themselves in a room by themselves. Wait, did I mention her period was that week?

After Sturbridge, we went up to Marblehead, which is near Salem and spent another 3 days there. Our bed and breakfast overlooked the water. There was a sitting area with rocking chairs that had a fantastic view of the ocean. The first night we found a nice little hole in the wall seafood resteraunt that was just amazing. They had scrod on the menu, which neither of us had heard of before then. We both gave it a try and it was delicious. We wandered around through Salem and did what walking we could when it didn't rain. We also took a day trip to Boston, walked the Freedom Trail and toured the USS Constitution. I must say it was a lot of fun walking in Boston. And, of course, we managed to find a great Italian resteraunt to eat lunch.

Our last week was spent on the cape. I believe the name of the town was Yarmouth Port. From there we went to Provincetown (a little early in the season to see all of the "interesting" people that flock there in the summer) and went whale watching. The Wife got a little seasick when they cut the engines and we were floating on the open ocean. We saw lots of whales and they jumped out of the water and slapped it with their fins and all the other whale tricks you expect to see. The whales came so close to the boat that you could almost reach over the stern and touch them. Coming back, we had the seas at our stern so the Wife felt all better by the time we got back to port.

Our other major sight-seeing trip from there was Martha's Vineyard. By then the weather had cleared and it was nice sunshine (including for our day at Provincetown). It was a blast driving around the Vineyard. We saw the cemetary where John Belushi is buried. We went by Jackie O's place (but didn't see her, damn). We saw two people on mopeds almost crash into the tour bus. All in all a fun day.

We had originally planned two weeks for our honeymoon, but by the middle of the second week we'd done everything we'd wanted to do and were getting bored so we came home a few days early. It was a nice time as it was for both of us the first time we'd gone on a trip together (not counting the 3 days we went to DC alone before the wedding to find a place to live, but that's another sordid story). It was so nice to finally be together in every sense of the word. Ah, young couple in love, that was us.

In my next installment, I'll give you the Navy Years. It was an interesting time for both of us as we did much travelling. I will leave you with a couple of quick pictures. You all better appreciate them because you have no idea how long it took me to get my scanner to work so I could get two lousy JPEG images to post for you! The things I do for you! First, the Girlfriend and I at our Junior Prom, circa 1982: 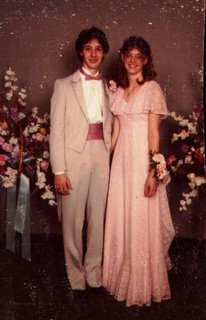 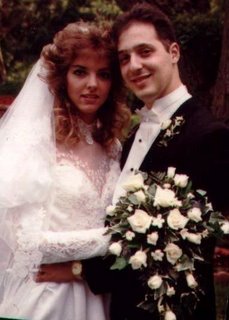