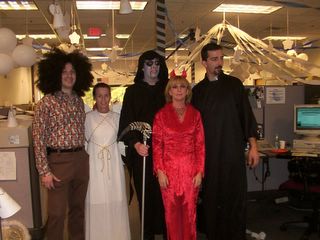 I was looking at some pictures from a while back and reminiscing about my former co-workers. The above picture was taken at my last job and is myself (on the left), my two co-supervisors (the two babes), my boss (middle), and one of our team leads (who is now dating the babe on the left, which is another story). Anyway, this picture represents one of the last times working there was fun. The supervisory team got along really great and we worked together well. This feeling of unity and comraderie lasted until Christmas that year. By the week after New Years 2003, it was all over. There's a story to go with it, but I'll leave that for another time. By July 2003, I had left that job for my current one. I left on good terms with the company, but I saw the handwriting on the wall and made a move while I could.

I was reminiscing about how friends loose touch. I was rather close with one of the two ladies in the picture while I worked there. We talked all the time, had lunch often, that sort of thing. She was kind of like my big sister. We told each other our problems, vented to each other, you name it. It's been almost 2 years since I left there and we barely see each other any more. We've had lunch a few times since I left. Recently I've tried to get together but the last couple of lunch dates were cancelled. She was too busy. Now I know this happens, but isn't it sad when friends just sort of drift away from each other? We didn't have any kind of falling out or anything. Our lives went in different directions and we simply lost touch. I had the same experience with my best friend from high school. We were inseperable until I got out of college and entered the Navy. He moved to Alabama and we just don't contact each other any more. I saw him once when he was in town over a year ago. We vowed to stay in touch but my emails went unanswered. Again, no big thing but quite sad.

To end this post on a brighter note, there's a little story to go with the above picture. The other babe (The Blonde One, as I still refer to her) supervised a particulary difficult account. High volume call center type of thing with lots of stress. She was always saying the account was hell. So for Halloween, they decorated their area as Hell. It was awesome! They had flames and smoke, and everyone wore horns and tails. The Blonde One had the high heels going and was swinging her tail around. It was great. The only disappointment was she didn't wear the fishnet stockings with the outfit. That would have made it totally hot.
Email Post