It was a busy Saturday for us. Grasshopper had his first communion Saturday morning. It was followed immediately by a nice party. My nephew is the same age as Grasshopper and had his first communion at the same time, so Sis and I decided on one party and split the bill. It was quite nice. Grasshopper was very proud of himself and is happy he can fully participate in the Mass like the rest of the family. It was a joyous and spiritual occasion for us. Our pastor gave a really nice homily and spoke to the kids directly. All the kids made banners which hung in the church and were quite creative.

Food at the restaurant was pretty good. We had a "family style" type of meal where they put the differenct courses on the table (with the exception of the soup and salad) and you just serverd yourself. There was TONS of food! We started with a chicken soup, then the salad, then there was Chicken French, Sausage and peppers, pasta, and eggplant parmesean. Followed by sherbert. Followed by my mom's home-maded cookies, cream puffs, and wandies, THEN followed by cake! Death by dessert baby! The kids even had kiddie cocktails with cherries in them. The boys finished the afternoon at the bar watching golf on TV. They're going to turn into very typical men.

I also promised some pictures, so here's some of my faves from the day:

The Franco clan, including my parents: 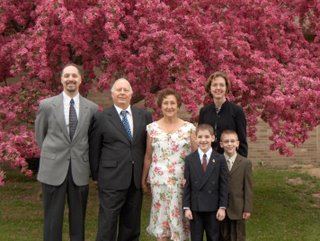 Next, just us. Good shot of the dress The Wife decided on. It's sleeveless under the jacket. And she did indeed look HAWT! 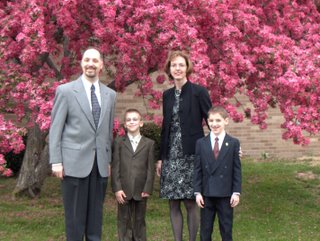 Next, a shot of the boys: 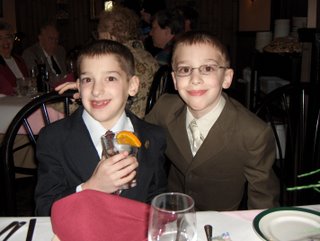 And finally, my complete fave, a shot of Grasshopper as he was walking by during the procession at the end of Mass: 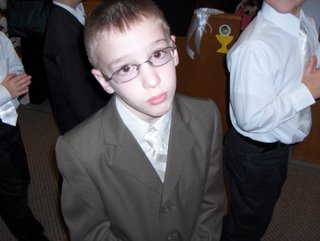