Stories from the road

This is the first of my posts about our trip to Detroit and the Henry Ford Museum/Greenfield Village. I could talk about the wonderful time we had a both locations and all the cool things we saw, but I'm going to start with one of the horror stories. Sort of. It is the story of our experience at the hotel.

We stayed at the Best Western Greenfield Inn, better known as the Pink Palace. Because it's painted pink. Duh! Color of the hotel aside, it was actually a nice place to stay. Less than 2 miles from the museum, package deal that included tickets to the museum/village and breakfast, pool and HOT TUB! Very nice place to stay. Overall our stay was nice, but the first night we decided to use the pool, since we got to the hotel too soon for dinner.

The last hotel we stayed, we got the pool all to ourselves (or at least, the Wife and boys did, I was seeing Queen while the swam). We went in this time and another LARGE family was using the pool. Normally, that wouldn't be a problem. Cause you know, they post rules, like no horse playing, diving, throwing balls around, or being obnoxious and rude (ok, that wasn't explicitly stated in the rules, but is understood by polite people). These, of course, were all the rules this family was breaking.

The younger kids insisted on splashing anyone in the pool, something which Grasshopper, you know, being autistic and everything, really hates. And though he asked politely several times not to be spalshed, was ignored. Then there was the throwing of the football while someone tried to catch while jumping in the pool. Or the beach ball. Or best of all, the taking over of the seats.

The next time we went to use the pool (just the boys and I since the Wife was disgusted with it) there was a different family of about the same size there, but they were quite polite. No splashing (at least, none more than you would expect), games of Marco Polo, and generally sharing of the stuff there.

I will say the hot tub was totally awesome! After a day walking around Greenfield Village, falling into the hot tub was a little slice of heaven. All the tension and aches just MELTED away. Too bad you can't stay in there more than about 1o minutes. Unless you want hyperthermia. But that's just me.

The other cool thing about the hotel (other than it being pink and everything) was Mr. Mugley. Mr. Mugley was this statue thing in the lobby. The boys thought he was kind of creepy, but that didn't stop them from getting their picture taken with him and talking about it for hours. Here's the pic: 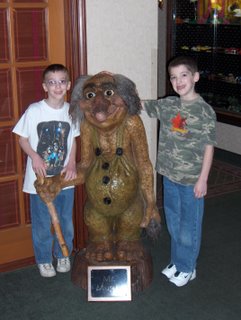