Put Me In Coach 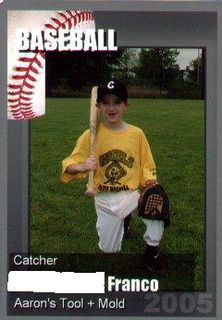 I am an incredibly proud papa tonight. It was my older son’s last baseball game was last night. He had probably his best game of the season. He didn’t score the winning run or make a great play or anything.

His biggest difficulty this year has been he’s afraid of the ball. Kids are pitching and they pitch pretty fast. He’s always backing away from the plate when batting for fear of getting hit. He also steps out of the way when trying to catch a ball and tries to catch it to the side. We’ve been working on these skills all season.

Today, he put a lot of the things we’ve been working on into practice in the game. He barely moved when batting. When he was playing catcher (the littlest kid on the team playing catcher because he wanted to, mind you), he wasn’t trying to jump out of the way every time the ball was pitched to him.

Overall, he did all the things we were working on correctly. He even scored a run, which made him very happy. My biggest frustration with his playing this year has been that he’s quite good at the game and loves it, but doesn’t attack the ball due to his fear. He’s on his way to overcoming his fear.

Oh, and by the way, not that it really matters to me, his team actually won the game. I’ve never cared if his team wins or loses and have never criticized him for losing a game. I’ve told him that many times. My only concern is that he plays to his ability and improves throughout the year. The first time I told him this, he thought about it a minute and was actually shocked when he realized that we’ve never talked about wins or losses.

So crack open a frosty root beer in honor of my boy and his most excellent play at his final senior T-Shirt baseball game. Next comes travel league starting very soon. I figure by the end of the summer he should be a natural.