I Done Doed It

I've spent a week off with the kids cleaning carpets in the house and looking at cars. I've looked at every manufacturer you can think of and went back to a few twice. By Wednesday I was most impressed with the Subaru Impreza. Sporty car, handled good, price was good. So what did I get?

A Nissan Altima. 3.5 SE. On a whim (literally, I was running other errands and went on a lark) I stopped at a Nissan dealer to check out what they had. I'd seen the Rogue on line and it seemed bigger than the Impreza, which it was. However, it was a sport ute, which I wasn't sure I wanted. So I checked out the Altima, which I did like. It was narrowed down to the Subaru and the Nissan. So I started doing research on the Nissan and found that if I could get my hands on a low milage 2007 model, I'd save a bundle. I called the salesperson on Friday, told her what I was looking for, and had an appointment Saturday afternoon to meet with her. She was going to do some research for me.

Come Saturday morning, I look in the auto section of the paper and I find a local competing dealer (about an hour drive out of town but with stupid low prices) had a BRAND NEW 2007 Altima with a V6 at a stupidly low price. As it so happens, the dealer I was working with had a very similarly equipped BRAND NEW 2007 Altima. The only difference was the car in the paper had a sunroof. So I drove the car the dealer had, liked what I drove, and then handed the salesperson the newspaper with the price circled and asked if they could match that stupidly low price (like $6000 below sticker price). And, of course, THEY DID!

I am now the proud owner of a kick ass Nissan Altima. I pick it up tomorrow. It's a dark slate (grey) metallic with black interior. I'll post a picture after I pick it up. For now, a picture of my old vehicle. I'd say I'm sorry to see it go, but I'm not. It's at the point where it needs work, and it's got lots of little things that are beginning to annoy the snot out of me. As a side note, when getting all the papers on my old car I found the sticker for it. It listed at about $2000 less than the car I'm buying, and the Altima is costing me about what I paid for the Olds back in 2000. Did I get a great deal or what? 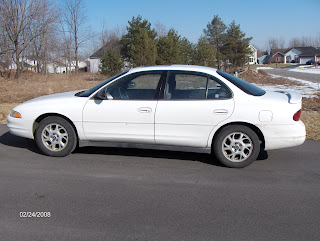