On Guitar Hero and Pictures

This weekend has been all about preparing for Christmas. We got a tree and decorated it, the Wife is baking cookies, etc. We had to get started since next weekend is totally shot. Thank God for the internet since that's where I've been doing most of my Christmas shopping.

So, first, as promised, here are some pictures of the Dining Room and Living Room (respectively) after being painted and with new blinds. I didn't bother with before pictures, since it's the same thing, just all in white. 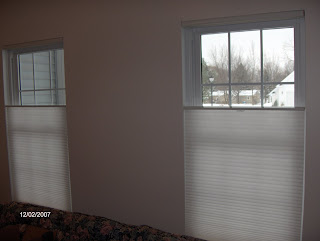 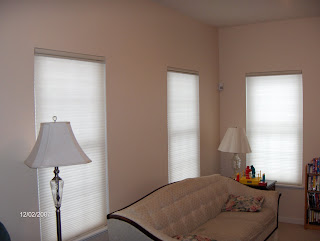 The rooms are biscuit, a shade of off white. Hopefully you can get a feel for the color based on the pictures.

As for the Guitar Hero thing, I'm sure most of you have heard of the game. You play a plastic guitar to songs on the screen and press buttons that I suppose represent strings on a guitar. Whenever I talk to people about the game, they seem to think I would love playing it. I've seen it played, and I have to admit, I find it rather lame.

I guess some people may have a lot of fun playing a toy Les Paul to songs coming out of the TV screen. As for me, I have the real deal. The other night, the Wife went to bed early and there was nothing on, so I turned on a digital music channel, grabbed my Paul, and played all the songs that came on. I got to rock out to Slow and Easy, Cat Scratch Fever, In the Evening, just to name a few. I even got to play April Wine's "Sign of the Gypsy Queen". C'mon, you ALL listened to April Wine back in the day, didn't you?

I guess I don't need to play a video game to be a Guitar Hero, I already is one. I cut my chops playing for hours to the songs on MTV, back when it was all music. So I guess I been there, done that.