What a weekend we had for camping! We went to the town of Herkimer and went to the Herkimer Diamond Mines. Basically you go there, the give you small sledge hammers, and you pound on rocks in an open air mine trying to find "diamonds" which, if you get one intact, is a perfect 18 facet quartz gem. According to the people at the mine, they're highly prized in Asia right now. In any event, it was rather fun pounding on rocks with hammers. It was kind of funny to think we actually paid money for the priviledge of making big rocks into small rocks. And you should have seen how seriously some people took it! I saw people with big sledge hammers pounding away at this place! And others with serious pry bars to go with them! It was too funny.

We did get some nice crystals, but we got better gems from doing "sluicing". We got a bag with dirt, and in the dirt were various gems. You put the dirt in a screen and sluice off the dirt to reveal what you got. It was also great fun.

Our campsite was the coolest ever. It was a KOA, but the tent sights literally backed up to a wonderful creek. The boys couldn't resist frolicing on the water's edge. And you couldn't ask for better weather. Saturday was sunny and 65. Fall was in full swing so we got great color on the trees. The only down side was that it was really cold at night (OK, it was about 40 degrees, but in the open air, that's cold baby. I was fine in our sleeping bag warmth wise, but I REALLY had to pee sometime after we went to bed and who wants to get up in the cold just to pee? Didn't make for the best sleeping. The Wife was all bundled up and near morning needed me to be her space heater but she did all right too. The boys seemed fine bundled in thier sleeping bags.

Morning was awesome. It was chilly, but there was a fog that just made for a beautiful sight. I have a couple of pictures to give you an idea of the site. We had a great campfire dinner and hung around the fire until about 9. By then, most of us were totally beat from swinging hammers and doing all that outdoor camping stuff. But overall it was quite a good time. After getting home yesterday, we hung out the rest of the day. The Wife and I put the kids to bed at a reasonable time and dutifully fell asleep watching Sunday Night Football. A good night's rest in our own bed and we were good to go. I'm feeling great today, although the Wife's ass is really hurting from crawling around the rocks for a few hours. Now tomorrow back to the normal grind.

Here's a couple of pictures of the stream we backed up to: 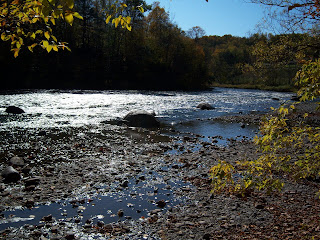 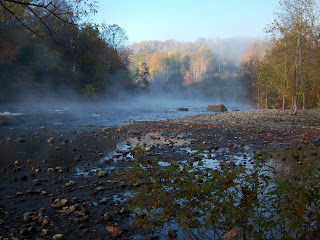 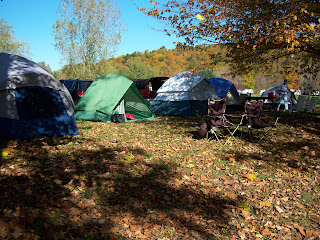