What a weekend in the northeast. The snow started on Friday afternoon and stopped this morning. Our neighborhood had over 15 inches of snow. For the most part, we stayed inside. However, yesterday we had to go out a couple of times. Grasshopper's cub scout pack had their Pinewood Derby. He entered an Underdog car. We did our best to make it fast and we did pretty good. We won a couple of heats. And the car came as second fasted Webelos car and 7'th overall. Here's a shot of the car (lower right): 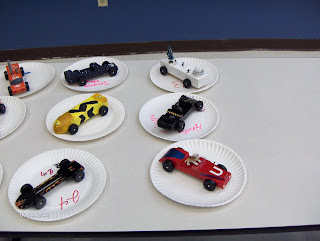 After the derby, we were off to Church. Grasshopper received his first Reconcillation. It was a nice service. We had planned to go out to dinner afterward, but with the weather, Grasshopper decided we'd order in pizza and watch a movie. We popped in Who Framed Roger Rabbit and just relaxed.

The only downer on the evening was that our furnace quit on us for a while. It was a pretty easy fix, though. The furnace intake had gotten buried in snow. I had to trudge out there and clean it out and then mess with the furnace a little until it would stay lit. Good thing we figured it out before the house got too cold.

This morning I got to get up early (even earlier if you consider I set the clocks ahead) and had to clean out a foot of snow in our driveway. Thank God for snowblowers. But it has been damn cold today and really windy. The boys were crazy enough to play outside but I only ventured out to go grocery shopping. The weather should pick up a little this week. Hopefully our schedule will get a little better too. Last week was insane (again). Hope everyone stayed warm this weekend and has a good week.