I saw the dentist today. He gave me the verdict with my tooth. I had a HUGE cavity in a wisdom tooth which he filled last time around. It apears that all this work on the tooth aggrevated the nerve. Which is in the slow process of dying. And doing it kicking and screaming all the way, which is the cause of all that mouth pain. He said normally, a root canal would be called for, but since it's a wisdom tooth I don't need, he's going to pull the tooth. Next Thursday. In the mean time, he's given me some nice pain killers for it and antibiotics to prevent it from absessing. I'd like to say I'm feeling no pain, but the good drugs are wearing off and I can't take another until bed time.


So to distract my brain from the pain, I'll talk about the Coast Guard sleepover. It was a boy scout event with Maverick. I had other things going (as in Grasshopper's activities) so I didn't get there until lunch time. Since Rochester is right on Lake Ontario, we have a Coast Guard detatchment. They have this nice little base all fenced in and secure on the Genessee River where it spills into the lake. The boys got a nice tour of the base before lunch and we were pretty free for a while afterwards. The Wife and Grasshopper came up to join us for lunch. Afterward we walked the pier while the boys froliced in the lake on a small beach next to the base. The Wife and Grasshopper took off around 4 since they weren't staying for the overnight. Later on, we all got a ride on a small coast guard boat up the river before dinner. I must admit, it's been a long time since I've been on a ship, and I did miss it a little. But only a little.


The boys prepared dinner and afterwards we had a nice camp fire and made s'mores. The boys then fixed breakfast the next morning and we went on a nice 2 mile hike to finish the day. It was amazing how quickly the time went. The first day, it got to be 10 pm before we even realized it. The weather was perfect, warm during the day, clear and in the 50's at night. You usually don't get weather this nice at the end of September. Overall it was a great time and a fun visit. Here's a couple of pictures from the event: 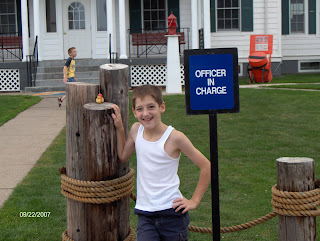 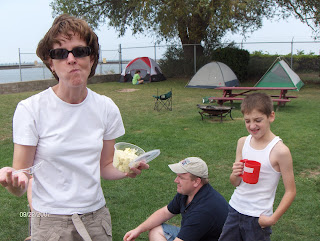 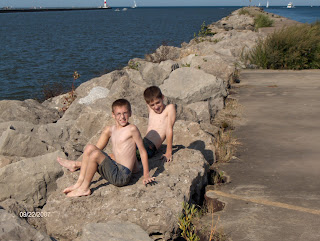 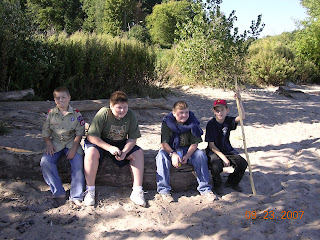