Before I get on with the post, I wanted to share a picture from our gig this weekend (like the feather?). Someone was nice enough to send them to us from the rally: 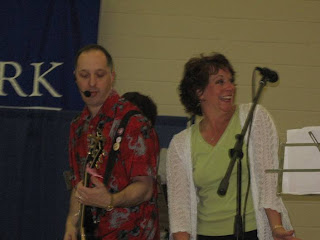 All of the pictures from the gig can be found on my Flikr account here.
So today I met again with the new boss and my counterpart in Schenectady. We discussed our thoughts on how our piece of the new organization should be run and who would do what. Without boring you with the technical details, we broke out duties of all technicians to "1st level" and "2nd level". First level is more phone support and break/fix, while second level is more advanced technical skills and creating all the systems the team will use to get things done. Myself and my counterpart were asked which we thought we wanted to manage.
I said that my counter part was probably stronger on the 1st level stuff and I was more technical and probably should manage the second level stuff.
And the both agreed! The takeover plan has begun. As soon as we finalize the structure, I'll have personnel in all 3 major locations in the organization reporting to me. I can then implement phase 2 of my master plan where I start getting my team access to things outside of our normal area of responsibility. Like a virus slowly but insidiously spreading through a network, we will infiltrate the IT organization until I and my minions rule all!
I mean, we will build a team atmosphere where members across responsibilities can work together seamlessly and are cross trained on other areas of operation. Yeah, that's it.
On a total side note, we went to a kick ass place for lunch. Last couple of times in Syracuse we've gone to the Dinosaur BBQ. A good BBQ place, but it was getting old. This time, we went to a genuine Irish pub. I knew it was genuine because it was 2 blocks down the road from St. Patrick's church. And they had pictures of the parade on St. Patrick's Day culminating in everyone gathering around the tanker truck full of green beer. I kid you not. Though something tells me they don't need to unload the truck. Just turn on the tap. It will be empty soon enough.
I had a beef stew in a bread bowl that was simply heavenly. And the atmosphere there was awesome. It was one of those places with a lot of dark wood on the walls and low lighting. A true pub atmosphere.
Email Post