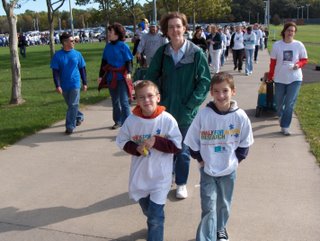 The 2006 Autism Walk was a HUGE success! The day was beautiful. A little chilly but sunny. Light breeze. We had over 1000 walkers who raised over $115,000, double last year's amount. We got major sponsorship this year AND local TV coverage. Team Grasshopper raised over $500 and have some pledges for more. If you wanted to donate but didn't in time, the website to donate on line is still up. If you care to use another method, contact me and we'll make sure the donation gets to Autism Speaks. I'd like to thank everyone that sent a donation. It is greatly appreciated.

The boys really enjoyed the walk (as did the Wife). We had one minor blow up. Grasshopper suddenly broke down, started crying, and wouldn't just after we checked in. We finally managed to calm him down enough to figure out what was wrong. In a word: BALLOONS. Grasshopper does not like balloons at all, unless he's in control of them. He's afraid they'll pop and he doesn't like the sound. They were everywhere. One of the groups was giving them out and there was a clown making balloon animals so kids were holding and wearing them. We finally managed to get him in an area of the walk where any balloons were not too close, and he did well. This is a good example of the kinds of fears autistic kids have. And why the walk was so important.

Should be a very interesting week. There's the gig at the Cathedral. Also, I'll be painting and putting tile in the laundry room. I got the tile about a year ago and its about time I put it up. I'll be home Thursday through Tuesday (mostly cause the kids are off Friday and Monday). So please send good home improvement vibes at the end of the week.
Email Post