There are a lot of stories to tell from a week at scout camp. I figured I'd break it up into Christopher stories, Nicholas stories, and my stories. Couple of housekeeping items. I've posted a bunch of pictures on Facebook for those of you who live there as well. The weather was pretty good all week. Temps in the 80's. It rained about 1.5 hours Tuesday night and half the day Friday. Clear skies otherwise so not too shabby. Last year was cold (40's) and rained all week. We had 29 scouts and 10 leaders at the camp. Pretty packed. Overall, we all had fun.

Christopher had an easy schedule. He had 3 merit badge classes, including a "throwback" one and COPE (Challenging Outdoor Personal Experience). Since it's the 100th anniversary of scouting this year, they offered a couple of retro merit badges, including carpentry. Christopher took that and had to build a bench using only hand tools: saws, planer, and a screwdriver to drive screws (try that these days in the age of power drivers). He had a lot of fun with that one.

He'd been DYING to do COPE but you need to be 14 to take it. Which he was this year. It's a high ropes, wall climbing, ladder climbing, team excercize kind of course. Some things are individual, some are team challenges. He had a blast doing it. I wanted him and another scout go up this giant laddter where each rung was 5 feet apart and you couldn't use the lines on the sides. You needed to work together to get up the thing. He's about 4 foot 8 and so was his partner. I was impressed they made it all the way up!

The other major thing he completed was the Great Canoe Race. He and two other scouts canoed across 3 lakes and had to portage (that is carry) an aluminum canoe between the lakes. It took them forever, but they finished! However, just before they got back, we had a camp emergency where we thought we lost a camper (turned out to be a lack of communication on the part of some leaders). As a result, the asked us all to go back to our camps. Christopher and his crew had not eaten yet as they were supposed to attend a picnic at the end of the race. Well, that just wouldn't do. Myself and one of the other adult leaders did a tag team on the camp councillors and managed to get bag lunches AND taco meals for the boys. We brought it back to camp and they had a feast! It was totally not fair to expect the kids to go hungry.

Beyond that, Christopher did a good job being a leader for the troop. He was one of the oldest scouts and acted as the assistant senior patrol leader (#2 scout in the troop). He showed some good leadership skills. While still being silly and a boy. So who knows, there may be hope for him. Here's a couple of pictures of the goofball: 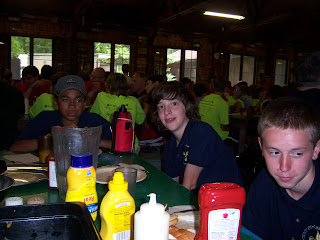 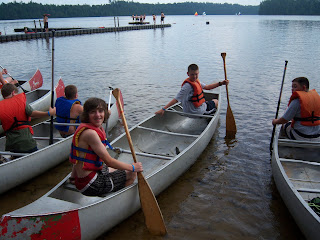 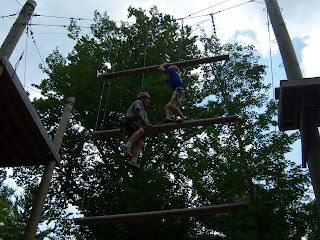 Jude said…
Wow that giant ladder looks interesting enough to get up. Kudos to Christopher on his leadership abilities, and for the carpentry merit badge!

Sounds to me like it was a fun time for all of you, and I'm sure glad to hear the weather was an improvement over last year. Looking forward to the rest of your stories Rocker Guy! Have a good week.
7:39 AM

sydwynd said…
Jude: He's about 20 feet up in the air right there. It's a tiring exercize. It was indeed a fun week, thought I was ready to come home by Saturday.
3:19 PM

Kate said…
Camp is the best, but isn't the point to drop the kids off and have some time to yourself?
9:25 PM

sydwynd said…
Kate: I actually had a lot of time to myself! My main reason for going was to ride off road, which I did a lot. Kids were in merit badge classes most of the day.
12:56 PM