This was Nicholas' second year at camp. Since he knew what to expect, he was an old pro at it. He had 5 merit badge classes set up, plus there were 2 partial merit badges he could get complete for a total of 7.


The big accomplisment for him this year was becoming a blue tag swimmer. At camp, you need to take a swim test to do water activities. Since camp has a lake with swimming, kayaking, and canoeing, taking the swim test is a good thing. Non-swimmers get a white band (white tag) and are limited to knee deep water. A red tag swimmer is intermediate in skill and can go on a rowboat with a blue tag swimmer and swim in deeper water, but cannot do kayaks or canoes. Blue tag swimmers can do everything. Last year he was a red tag are REALLY wanted to do kayaks so he was really motivated this year to pass. Which he did!


We found time to go both canoeing and kayaking. He enjoyed the kayaking most. It's a lot of fun padaling out on the lake. We even went past our camp and saw some of our troop fishing. He could have done the morning polar bear swim (where you get up at like 6 am and jump around in the cold water) but wisely chose not to. It's not as fun as it sounds.


His other big accomplishment was to earn his archery merit badge. He really struggled with it as you need to get 150 points after shooting 30 arrows (in rounds of 5). It didn't go well for scouts the first week of camp to shoot 6 rounds in a row so they made the decision to add the scores from the best 6 rounds of the whole week. However, come Thursday his best total score was around 100. Not even close. However, there were still plenty of scouts struggling. Additionally, the scouts lost some shooting time due to an emergency.


Based on all of that, the leader of the archery area decided to relax the standard to 120 points on 6 rounds. Come Thursday, he was taking every open opportunity to shoot. I began hanging out with him to encourage him and keep him focused (and not frustrated). By Friday, his best score was about 115. A couple of consistant rounds, and he was at 118. The next open shoot, he was at 119. Then, at the last open shoot, he shot the round that got him to the magic 120. He was quite happy as he really didn't want to take a partial complete for the merit badge.


He had some other trying times as well. The first day there he managed to slip and fall in the lake, getting his shorts and brand new boots totally soaked. I was not happy, let me tell you. However, once we both calmed down we got everything dried off. Having dryers near the camp helped (yes, we actually had shower houses and a washer and dryer available). He had a couple of minor altercations with other scouts (personality conflicts really) but overall he had a great time. Here's some pictures of his adventures: 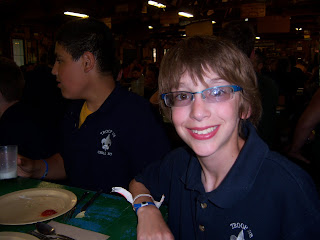 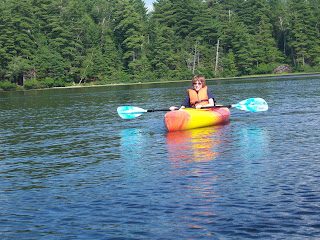 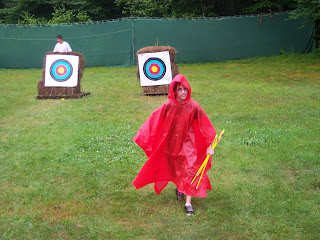 Jude said…
Great pictures! His tenacity really paid off in archery, good for him that's quite an accomplishment! Of course having Rocker Dad there to encourage him helped I'm sure. :-)

That's good he was also able to get his blue tag for the water activities too, much more fun for him. (and "grown up") As a kid I was always so terrified of deep water (still am) that I could never get past "beginners" in swimming lessons.

He looks so proud of himself, and very happy in the kayak!
7:33 AM

Jammie J. said…
It's hard to see your kid struggling, I would imagine. It's good that he hung in there and worked toward his goal... teaching him that frustration isn't the end, but to work through that and reach his goal despite his frustration.
3:17 PM

sydwynd said…
Jude: He was very proud of himself on both archery and swimming. He had a lot of fun at camp despite a little pressure to get the merit badge done.

Jammie: I'm all about making sure the kids have realistic expectations. By Wednesday, at least half the kids were struggling. Nicholas tends to take things personally as if he's the only one in the world with a particular problem. Teaching him that doing your best and performing to your potiential is much better than trying to keep up with other people has been challenging. Hopefully he's getting it.
6:32 PM