This weekend we've finally got a chance to sample the produce from our garden. We planted tomatoes, lettuce, green peppers, and squash. Some of the squash were ready so we picked it and just saute'd it. It was heavenly! We used a little more the next day to make a pasta primavera with shimp dish for dinner. Yummy!

We've got a lot of rain this season but on the plus side all of our plants (vegetable and landscaping) are doing great. As a matter of fact, one plant is doing especially well. Last year we bought a sunflower to plant since Grasshopper really likes them. It was a shitty little plant that barely got 18" tall and had like one flower. Well, apparently, this thing dropped a few seeds. Because, this year, the below is what came up out of the ground all by itself: 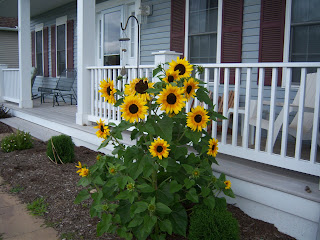 There are even more flowers on those plants now than when the picture was taken. It's going gangbusters.

Also, despite the rain, we're managing to get some family bike rides in. We went out today and biked next to the Erie Canal and got a good 12 miles in. Of course, we got poured on right at the end of the ride but it was still nice.

Not a lot going on around the Casa de Franco, just the usual. Next weekend I'll be going white water rafting with the boys and their scout troop. The Wife would go but thinks the rapids will be a little to adventurous for her. But give the woman credit, she got the family into biking and kayaking, so she is turning us into outdoors people.