This weekend we did something we hadn't before at the holiday time. We attended Tuba Christmas. To be more precise, Grasshopper, a Euphonium player in the school band, played at Tuba Christmas. The premise is pretty simple. Anybody that plays baritone, euphonium, tuba, or any big, deep, bass brass instrument (including sousaphones) shows up, rehearses for about an hour and a half, then puts on a Christmas concert. About 200 players showed up!


Ages of the musicians ranged from elementary school (as young as second grade), to well into the "golden years". There were quite a few players well past retirement and beyond their 70's, including one person in their 90's. The conductor had people stand up in age groups to make the point that music is a life long endeavour. But it sure was impressive.


If you get a chance to see a Tuba Christmas near you (it started in NYC at Rockefeller Center so my pals out there should definately go!) I highly recommend you attend. You wouldn't think a bunch of low instruments like that would sound good doing Christmas music but it was awesome! If you sit near the group, you can literally feel the music. It was completely amazing.


This weekend we also got our tree and decorated it. Jude has asked we post pictures of our trees so just for her, here it is! I'm off now to ward off the cold by sitting in front of the fireplace with my coffe spiked with Amaretto di Sarono. 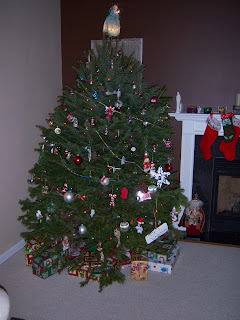