Cub Adventure Camp is a 3 day Cub Scout camp. I went with Maverick 2 years ago and wanted to give Grasshopper a chance to go as well. The camp has 5 different villages, Hihg Seas (sleep in ships), Frontier Fort, Medevil Castle, Native American, and Mountain Man (sleep in tents). Mountain Man is only for 5th graders since it's preparing them for Boy Scouts. Last time I did the Native American village with Maverick and we slept in teepees. Sounds cool, but if it rains, it all goes in the open hole in the top and soaks everyone. This year, they got rid of the teepees and built a long house. With a roof. And bunk beds. It was WAY more comfortable to sleep in.

Day 1 was mostly orientation. We arrived, got our stuff in the village, took the swim test, took a tour of the place, and basically hung out. There was a big camp fire all the kids attended and the staff put on skits. It was great fun.

Day 2 was the real program. Morning consisted of village time, which was fun "native american" games. Followed by Archery. That was a total blast. Our instructor was blind. Yes, you read that right, she could not see. And was a dead shot. She could put her hands on a student and tell them what was wrong with their technique. We found out an interesting thing at archery. Grasshopper was trying to hit the target and was firing straight but consistently to the left. Turns out, he's left eye dominant. We came back later during open program and tried him shooting left handed, and he rocked! He does everything but shoot right handed. Pretty cool!

After Archery was fishing. Mind you, I don't fish and don't have a clue. But to earn a belt loop, Grasshopper had to bait a hook and try to fish. Not only did he bait his own hood, he caught not one, but TWO fish! First time out. Not bad for a beginner. After fishing was lunch, followed by boating. We played capture the flag. Of course, our team won every time! Next was swimming. Luckily the weather was nice and the pool was warm. After that game shooting. They let the boys learn to shoot BB guns. Grasshopper enjoyed it, but had trouble keeping his aim steady. Again, left handed shooting!

Next was nature time, where they working on a belt loop requirement. Next was dinner, followed by open program. We went back and did more shooting and archery. Grasshopper earned a shooting pin by shooting in 4 different positions, standing, sitting, kneeling, and prone. He liked that a lot. We then had a village campfire which took us until lights out at around 10 pm. What a day!

The next day was basically the same, except another village time after archery and we left after dinner. At archery, we tried shooting at balloons. Grasshopper (or I for that matter) didn't hit a balloon, but he got an award for sportsmanship, which he was proud of. During boating, we did a sponge war. Let me tell you, there's no mroe fun that lobbing wet sponges at other people while out on the lake. There was so much laughing and giggling, it was a blast.

What I liked most about Adventure Camp was that they gave the boys the opportunity to earn way more badges and pins than the last time I was there. Last time, you could earn a belt loop for archery and BB gun, and Aquanaut if you were a blue swimmer. This time, they let all the kids get aquanaut, those two belt loops, and aobut 6 other belt loops and pins. The only thing we didn't do was the Polar Bear swim. You get up at 6 am and jump in the pool at 6:30. I did it with Maverick and luckily Grasshopper wasn't interested. Whew!

Overall Grasshopper had a great time. He'd really like to go back next year. Not sure we will, but I'm glad he enjoyed it. Below are a couple of pictures from camp. While I had a good time, it was nice to get back and sleep in my own bed. Also, it was actually really nice to get away from everything for a few days with no contact back to work or anything else. It was almost like a mini-retreat. Very refreshing. 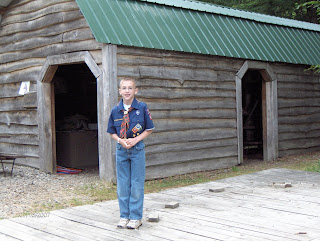 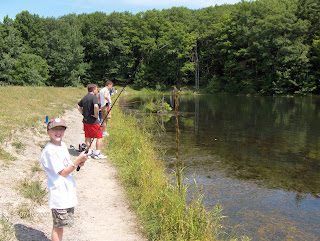 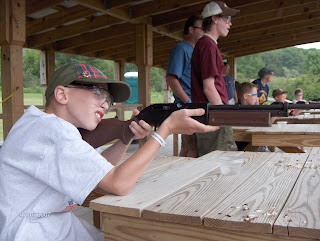