What a wild weekend. Filled with kids activities and church activities. Which is good considering all the crap I'm going through at work right now. It was nice not to think about it at all for a few days.


Yesterday was the big day. The Blue and Gold Dinner. Arrow of Light. Crossover.


Last night was the annual Blue and Gold dinner for Maverick's Cub Scout pack. His last. We had a nice dinner and moved on to the ceremonies. The first was one the Wife came up with to honor the den leader. All the kids made an "award" to give him as a token of thier appreciation. He was quite touched and almost cried when one of the scouts handed him a picture signed by the whole den to hang on his wall. We also gave him a gift card from the parents and he recieved a nice clock from the pack saying "only 1 hour per week", which is the amount of time they SAY it takes to run a den. Sucker.


Next we moved to the Arrow of Light ceremony. This is the highest rank a cub scout can achieve and is the only cub scout acheivement that can be worn on the Boy Scout uniform. And our boy earned it. It was a touching ceremony. The Wife stood behind him and pinned on his Arrow of Light patch. Then there was a nice candle lighting ceremony. Also, the kids were given a "survival kit" with things in it to remind them about things in life. Like a pencil to write down their blessings every day. Here's Maverick being very proud of his acheivement: 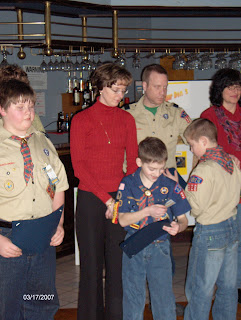 After that was the crossover ceremony to Boy Scouts. They moved a clothes pin with their names on them on a board from the rank of Webelos II to Arrow of Light. Then the walked over the bridge we use for crossover. Then they got their "colors" from the troop they'll be going in to. The Wife thought she was going to ball her eyes out, but she held it together pretty good. I saw some moisture in there, but it never leaked out down her face. She's a proud mama of a Boy Scout. Who'd have thought?

I'll leave you with two more pictures: Maverick with his new colors, and then a group shot of the new Boy Scouts: 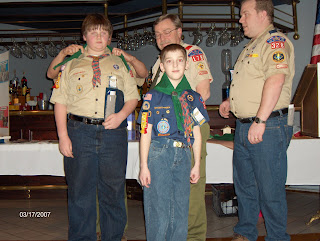 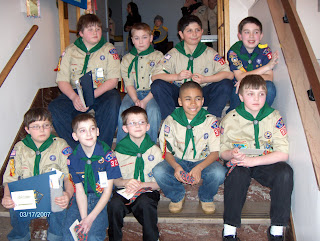