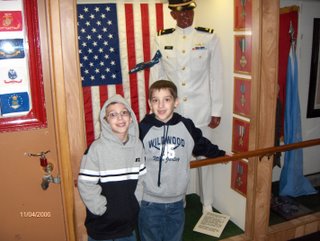 This weekend was our sleepover at the Buffalo Naval Museum. The museum contains three ships, the cruiser USS Little Rock (CLG-4), the destroyer USS The Sullivans (DD-537), and the submarine USS Croaker (SS-246).

All pictures from the visit can be found here.

The first thing that struck me when we got on board was the smell. Naval ships have a distinctive smell that you just can't describe. It's simply "ship smell" as the Wife so eloquently puts it. But dammit, the second we got on board, there it was. I flashed back nearly 15 years to my time on USS Bainbridge. The whole weekend was that sense of a long time/no time at all had passed. One of the very first things I noticed was that PIMA (if you recall him from the last sleepover) was not in attendance. I will not say I danced for joy, as that would be wrong. But I will say that it was much quieter than the previous sleepover.

We actually stayed on the USS Little Rock, not the USS The Sullivans, as I had previously thought. We started out by claiming a rack. We got to berthing in the front of the line so I got us all one set of racks. Of course I was on the bottom as it had the most room. Maverick took the middle and Grasshopper was on the top rack. After a safety brief, we got to wander the ship until evening chow. The POD (Plan of the Day) set evening chow at 183o. We were all set in berthing by 1730, so we had a good hour to look around. I got to show the boys an officer's stateroom which was laid out a lot like the one I slept in, we toured the missile house and I got to show off my knowledge to kids and parents alike, and we got to check out 6 inch guns.

Evening chow was "seagull" fingers, which the boys enjoyed immensely. I must admit, this chow was much better than most of the Navy chow I had. After chow, they had two movies going. Aft they had a kids movie (Toy Soldiers I beleive) and The Fighting Sullivans (in honor of the ship) in the wardroom. I dropped the kids off aft before retiring to the wardroom for the "grown up" movie. However, Grasshopper soon joined me and also enjoyed the movie.

Lights out was at 2230. I had hoped to get a good night's sleep, as PIMA was not around to keep me awake, but alas, in the rack directly across from me was Snoring Guy. Not just gentle snoring, but the wake the dead level of snoring that would ensure no rest even for the wicked, let alone the weary. Luckily, the snores subsided to only slightly annoying level within a hour and we got about as much sleep as you can on a moderately comfortable rack. Grasshopper was up at 2 am since his sleeping bag, which he used like a blanket, fell off and he was cold. I had the dad hearing thing going for a while to make sure he'd settled down and finally managed to get some rest.

Reville was at 0630 (luckily not Zero Dark Thirty) to put our gear in our cars before morning chow. The boys enjoyed a hearty breakfast (the each had 2 slices of french toast, sausage, juice, AND milk and cereal). After that, we were free to tour the ships. We spent the next couple of hours touring the topside spaces on the Little Rock which were off limits the evening before. Again I got to regale my children and compatriots with "real" stories from the US Navy and give some depth and insight into the things we were seeing.

The boys were suitable impressed on how cramped a submarine was and were able to see my wisdom in choosing the surface nuclear fleet over the submarine fleet. Those things are just too damn cramped. The Sullivans was about the same size as the Bainbridge AND we got to tour the engine room so I got to put on my Engineering hat again and explain boilers and turbines and feed pumps and the steam cycle. All in all it was a lot of fun, both for myself and the boys. The thing that struck me the most probably was that I still miss the Navy at times. Not all of it, obviously, but certainly the comraderie and sense of being part of a select group. It's difficult to explain being in the military to someone that has not been, and I think each branch of service has it's own unique experience. I was a sailor for 5 years and it's still a part of me.
Email Post