School is going well so far. Second module is complete so 5 weeks left in the semester. Going into the stretch.

For those of you following Ellen and/or I on Facebook (yes, she finally has a Facebook account), you'll have seen we have a new addition to the house. Over the summer at Boy Scout Camp, Grasshopper worked on his Reptiles and Amphibians merit badge but didn't realize there was a requirement to care for a reptile or amphibian for at least 30 days. He got a partial on it until he could complete it. Since then, we've been looking for an opportunity to "borrow" a pet for the requisite period of time so he could complete it.

As it turns out, another of the scouts has a turtle. We had hoped to work something out at some point, and Grasshopper had approached him about borrowing his turtle. The interest wasn't there initially. However, it turns out this scout got a second turtle and the two were not getting along. He offered to all us to "borrow" the new turtle for an indefinate period of time, which his mother clarified meant "take him and keep him". We were unsure but finally broke down and got an aquarium for the beast and "adopted" him. So below is Leo the Turtle (previously known as Coolio the Turtle). 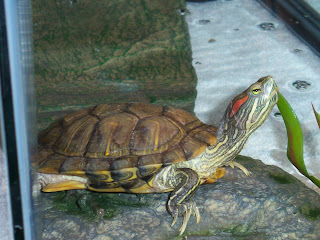 The turtle is a surprisingly good pet. It's easy to care for, just turn on the lamps in the morning, give it some food, and turn them off at night. Every week or two you take out some water and add clean water back to the aqauarium. And it's rather soothing to sit and listen to the water pump and watch the turtle. Who knew?
Email Post