Last night I raced in the Fat Tire Tuesday series.  It's a mountain bike race through a YMCA camp.  Combination of single track and open fields.  I like the course because it's got some technical parts but also lots of flat areas to recover after getting your ass kicked climbing hills.  As a beginner I ran three laps, which worked out to just under 7.5 miles.  Not a bad time, about 54 minutes.  My time last year was 51 minutes but the course was a little different so it's hard to gage whether I did better or not.

One thing is for sure, that course kicked my ass.  The back part of the course was a climb up a hill with a bunch of switchbacks.  The hill was pretty sandy so you're trying to climb, turn 180 degrees, and try not to spin your tire on the turn and wipe out.  There was another climb near the end of the course that was similar but with no switchbacks.  Still, trying to climb AND turn in a sandy track is a bitch.

I did pretty good the first two laps, but by the third I was really wiped out and started running into things.  The other thing that made the course a little difficult was trying to get out of the way of faster riders.  The courteous thing to do is move over if someone faster is coming up behind you.  However, there's not always a good spot to move over if your in a tight single track with trees all around.  The problem is that once you lose some of your momentum and your tired, you start getting squirrly.  For example, I tried slowing down to go around one side of a tree to let the rider behind me go around the other side.  And slammed into the trunk of the tree with my left shoulder.  On the final climb, I had to slow down a little bit and lost so much momentum I fell over like 3 times just trying to get going to climb the hill.  Again, sandy terrain didn't help.  However, I did finish the race!

Probably the best part of the race was having a cheering section.  Ellen and the boys came along.  Ellen's neice was there as well since her husband was racing also.  So when I'd come through the area where they were hanging out, the would cheer and ring cowbells (that's what people do in cycling races).  Nothing gets you pumping like having people rooting you on!  I was dead tired after that but it was a good time.  There's three more races but I don't know if I'll try all three.  Perhaps one or two more.  I havent' been riding as much this year as last year (damn weather!) so I may need to train better.  However, there's a 15 mile charity road ride coming that I may do.  I need to get more detail.  The coolest thing about racing last night was there was a guy that did the course (at least 3 laps) on a UNICYCLE!  No shit this guy had a mountain bike tire on the thing and ran through all the hills and everything else on it.  THAT is a totally different kind of crazy but something I can respet.  Here's some pics of the race: 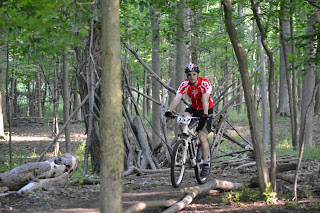 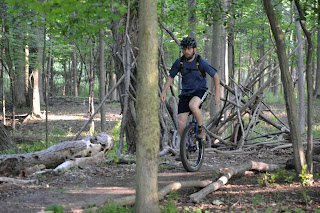 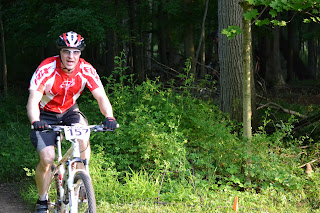 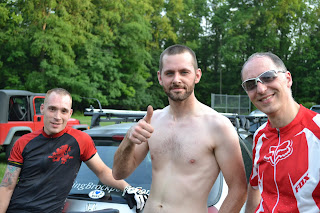 Jude said…
Whoa, having read the description of the course now I understand how tough a ride it must have been! And for someone to do it on a unicycle is cool too.

Cowbells from here for you too Rocker Guy! Good job!
8:43 AM

sydwynd said…
Jude: It can be grueling. But its such a blast! There was a gentleman in his 60's there racing. I want to be THAT guy.
2:51 PM

Jammie J. said…
You keep going the way you're going, with the passion and love you have for riding? You WILL be that guy! :)

sydwynd said…
Jammie: I hope so! I feel good for a guy my age so no complaints!
7:01 AM

sydwynd said…
Bob: Many thanks to my Wife for taking the snaps! All the credit goes to her.
8:04 AM